Class One: (Freestanding for the floor) "Love is Only Nature's Art" 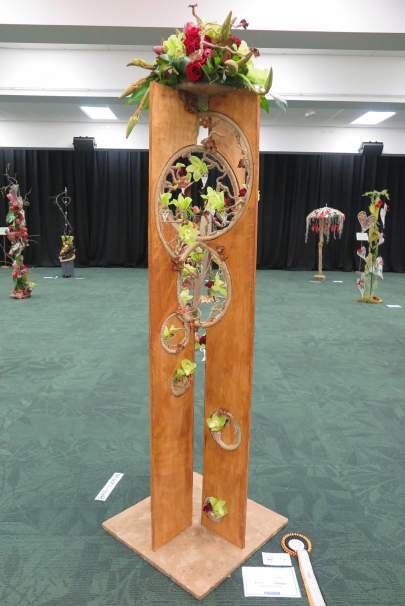 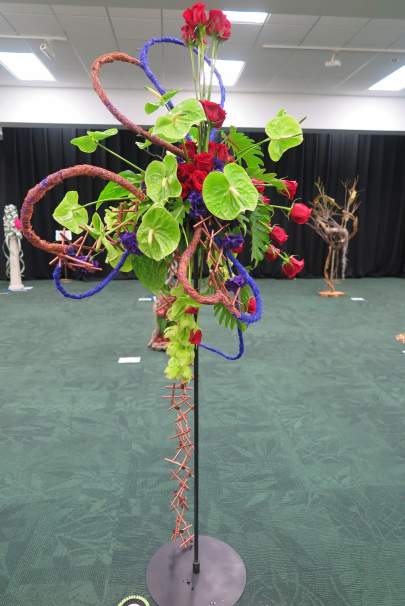 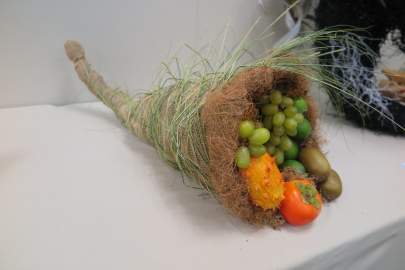 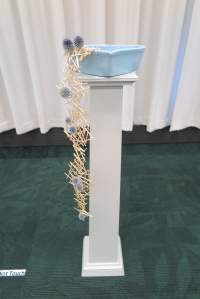 Area Designs
Title Options: 'Love Is In The Air' or 'I Left My Heart In...' 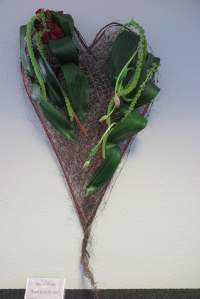 Jean Shine is an award-winning floral designer from Brunswick, Western Australia. In her delightful and informative presentation Jean gave us an insight into her extensive knowledge of plants and their habitats and the creative inspiration for her floral artwork.

Design 1, ‘Cascading Corners’, was built on a frame constructed with short black cornus stems attached with cable ties to a length of bronze wire netting. This frame hung over a metal spike on a stand with the back part folded back on itself to conceal the stems of the plant material used. Florists’ foam sponge was wrapped around the end of each stem and then covered with a leaf and tied with wire. Two white anthuriums, three white Zantedeschia flowers, and a length each of green Amaranthus and Rhipsalis sulcate were used to produce a very pleasing harmonious design with a dynamic line and contrast of colour. Design 2 was a sphere covered in kelp and enhanced with two red anthuriums and lengths of Rhipsalis baccifera.
To make the sphere Jean had made several circles out of stub wire (1□(1/2) lengths joined together) and arranged them into a globe shape and secured them where they intersected. This sphere was placed on a stand made from stub wire wound with paper-covered wire. Test tubes were secured inside the sphere.
The sphere was covered with a type of common seaweed called Ecklonia radiata or Harlequin’s hideaway (little fish like to hide in the leaves), which washes up on the beach near where Jean lives. The kelp had been bleached (one litre of bleach to 10 litres of water), soaking for 24 hours, then washed and laid flat on a towel to dry very slowly. It was then pressed between sheets of baking paper with a heavy book over it, and ironed before using to make it soft and pliable. The prepared kelp was then glued onto the wires of the sphere giving a myriad of textures and different shades of brown.
The design was completed with the anthurium flowers and the mistletoe cactus. Design 3 was described by Jean as “a radial design of sunshine”. The base of the design was a wax plate which Jean described in detail. Start with a form such as a large plate (it can be any size or shape), place upside down and cover in tin foil. Then add a layer of fabric and a layer of wax and repeat this several times. Jean had used orange wax to complement the colours of the plant material (see photograph). Once set the form can be taken off the plate and the tin foil removed. More wax and fabric can be added to increase the strength. What results is a thin but light, strong and waterproof base. Frogs can be waxed or hot-glued into the centre.
A half sphere of floral foam was placed in the centre of the base and covered in moss, into which was placed red salvias, orange Heliconia psittacorum (torch heliconia), red anthuriums and Dracaena reflexa leaves.
The resulting effect was a strong radial design with symmetrical balance, and a dominating colour of orange from the heliconia flowers. Sunshine indeed!

Design 4 had, as its base, a woven basket constructed from paper-covered wire. This was made from 20 lengths of wire twisted alternately to produce rows of diamond shaped holes when looking down into it. A piece of cane was secured around the rim of the basket to strengthen it, and then camellia leaves wrapped around the top edge. A second decoration of small pieces of bleached kelp (bleached three times to make them white) threaded onto cotton was placed over the leaves and secured.
The wire bowl was displayed on a wire frame (4 legs and 8 arms) made from stub wire and paper-covered wire, and the design was completed with a Xanadu leaf and a bunch of bunny tails. Design 5 demonstrated a way to use waxed kelp. Two matching flat white plastic plates were used for the base and displayed vertically on matching stands (again, stub wire and paper-covered wire). The small pieces of kelp were bleached three times and then dipped in wax.
They were stuck randomly onto the plates and the final array was draped with a beautiful stem of twisted hazel with catkins (Corylus avellana 'Contorta') and pale green cymbidium orchids on bullion wire.

Design 6. Jean’s final presentation was a tall vertical design built from a square frame made with red dogwood. She said that normally she would attach the frame to a four-pronged wire frame (see photograph) so that it looks like it is floating, but on this occasion she thought that the dogwood frame was too heavy to be supported solely by the wire frame so she sat it on a slice of tree trunk. After making the wire base frame she made two panels from lengths of red dogwood tied together with cable ties and attached these to opposite sides of the wire frame. She then filled in the two blank sides with more dogwood lengths and also made a couple of horizontal grids across the centre of the structure to keep it rigid. She said that the stems should not be placed too close together otherwise you can’t get your hand in to do the ties and put in the plant material.
Test tubes were placed within the structure, predominantly at the bottom but also at higher points. These were then filled with the plant material: Long green phormium leaves in the centre of the structure, huge leaves of Ligularia reniformis at the base, and red flowers of lily, rose, dianthus, and anthurium. A long head of green amaranthus fell over one side of the design and a few anthurium leaves brought the green up to the top of the work.
This was another impressive design, with its emphasis on strong vertical lines and dominance of colour.